Everything’s ready and we’re really about to sail across an ocean … See you on the other side ! 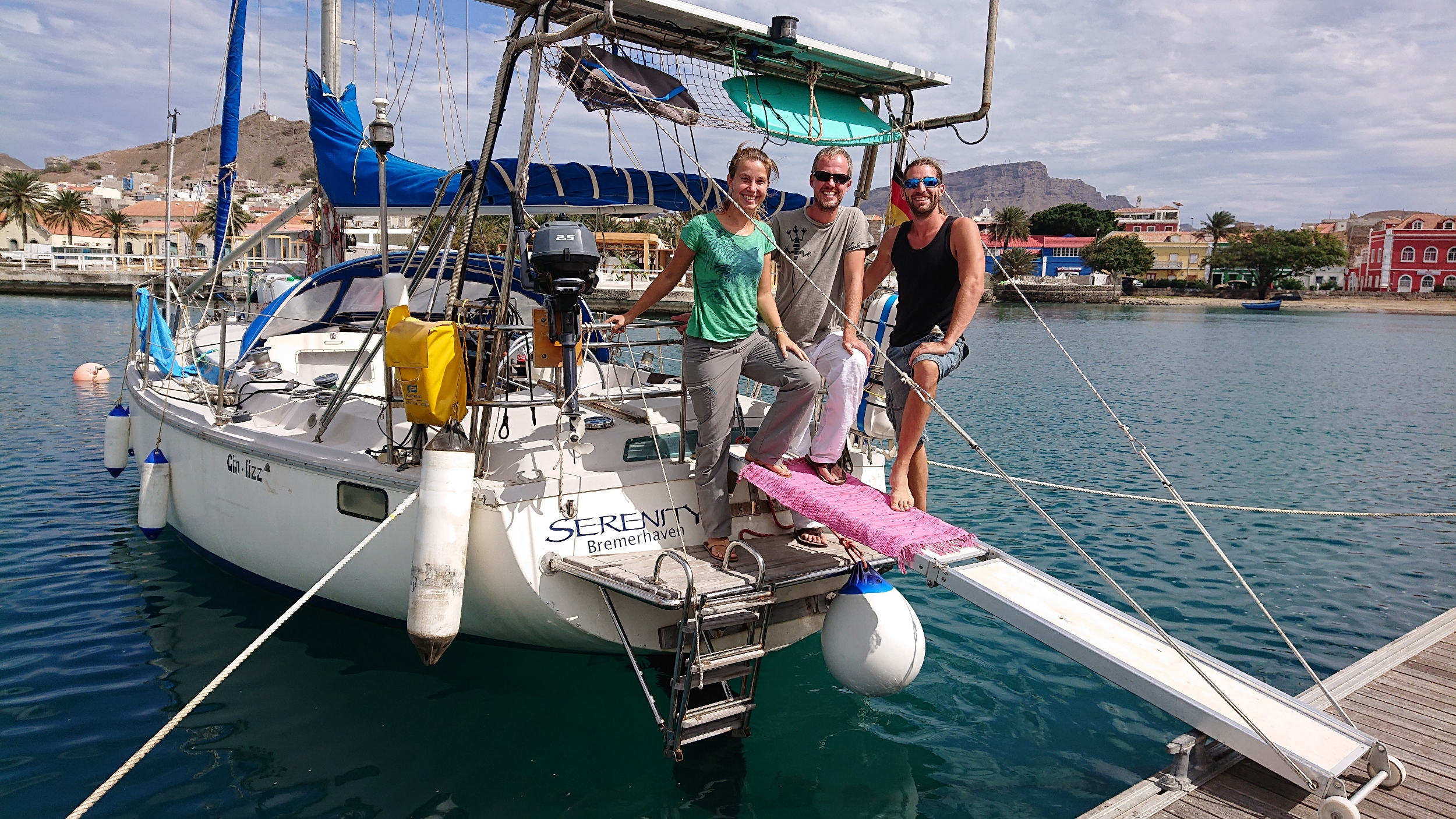 as some of our dearest stalkers have already noticed, we arrived on Sal in the Cape Verdes yesterday. Now Serenity is lying peacefully in the bay in front of us and we are drinking cold coke at a bayside restaurant of our new friend Obama. 🙂

So we found another lost place! Well its even on Google Maps (https://goo.gl/maps/WoyBdUqUE6t), so maybe not so much lost during the tourist season, however we had to sneak there through quite some bushes and across some walls and at this time of the year we were the only people out there.

END_OF_DOCUMENT_TOKEN_TO_BE_REPLACED

I just wanted to say we are fine after the autumn storm hit Italy. Luckly it wasn’t that bad at the south of Sardinia. At the beginning the wind direction was south-east pushing the swell into the harbour and it was quite rocky. So at four in the morning we were running around on the pontoon to keep the catamaran next to us from pushing against us (by stealing his fenders at putting them to the other side :D). Later the wind luckily turned to south-west as predicted, which is safe for this harbour, before the real gusts up to 50 kn were arriving. Actually this was the first time I saw a barometer dropping around 10 mbar in some hours remembering this rule of thumb from the sailing book! However it was a quite impressive roaring in the night, but we were lucky and nothing happend. And due to the bad weather we had to stay inside for an entire day, eating sweeties and watch bad movies 😉

At the italian main land in Rapallo the harbour is quite unprotected and open towards south-west and wind up to 80 kn (!!) was annouced causing 5-6 m waves directly into the harbour with catastrophic results:

However weather is clearing up again here and in two days the sea will be calm enough to proceed further west to Ibiza, second try!

END_OF_DOCUMENT_TOKEN_TO_BE_REPLACED

So we’re currently in the middle of Mediterranean sea between Sicily and Sardinia. There is water and nothing but water in all directions and it’s awesome. Actually that’s not true, there are dolphins visiting every couple of hours and birds coming to rest on our boat for a bit now and then. We’ve had some nice sailing wind, but also quite a bit of motoring, but Serenity is gently rocking along. Anyway, getting back to the helm! (This is a test, posting via Iridium, see how it works…)

We fixed our engine for good yesterday, tested it, checked the weather five last times and tidied the boat. This morning we got up at six to set sail to Sardinia. This is it. We’re finally, finally leaving Sicily.

The journey will take until Sunday and lead us over calm, open waters, not too much wind, so good conditions for a first night at sea (though probably lots of motoring). And the first time we’ll lose sight of land on this voyage. Not to worry, though! There are always a few satellites hiding in the skies. Might just try posting from the middle of the sea tomorrow!

Well, we already posted some stuff about refitting a nearly 40 year old sailing ship and some of you already knew about “Godot Eisenschwein”, which was my most favorite, annoying, little refit project before the journey could finally start. So this is the story of our engine….

END_OF_DOCUMENT_TOKEN_TO_BE_REPLACED

While we are stuck here in Sciacca anyway – we have to wait for a new starter motor to arrive, which should hopefully happen today – we had lots of  time on our hands. We used most of it to enthusiastically waste it – lying around, reading up on sailing theory, practicing tin whistle, using the WiFi to download more music and audiobooks and also doing nothing at all. But we also took a day to explore the city. END_OF_DOCUMENT_TOKEN_TO_BE_REPLACED

To all of you patiently waiting for news: We have actually left Licata this noon and have finished the very first real bit of the journey to spend the night in Porto Empedocle. The way here was refreshingly boring. Daniel was still working to recover from our Goodbye-Licata-Party yesterday evening. Kai did “Skipper of the day”. And I was mainly lying around in the cockpit and got my stomach acquainted with the waves…

Thinking about it for another moment: AAAAAAAhhhh we are really doing this. END_OF_DOCUMENT_TOKEN_TO_BE_REPLACED