Brewer’s Bay is situated on the north coast of Tortola, the largest of the British Virgin Islands. It has become one of our favourite places in the BVIs over the two nights we anchored there, due to its beautiful scenery with lush vegetation (while much of the rest of the BVIs is quite dry this time of the year), large and intact coral reefs and teeming sea life around the rock formations at its entrance.

Its large coral reefs are also the problematic factor when sailing into the bay – the maps in our navigation software did not agree with the maps in our guidebook, and as we found when I jumped in the water fully equipped with snorkel-gear to scout the bay before we went in further, we realized: neither of them agree with reality. There are large reefs on both flanks of the bay and a massive one in the middle that effectively splits the bay in two when it comes to anchoring. Swimming ahead of Serenity, it was however hard to miss the large eastern sand patch and we safely dropped anchor and waved our Swedish friends from the Chibidarra in, who anchored next to us. Our original plan had been to let them do the scouting (for a change), but they were sailing so slowly (surely on purpose) that we overtook them (just a bit too easily) and when the wind died just outside the bay, Daniel said something along the lines of “Screw it, we’ll do it ourselves…” and fired up the engine (knowing we were being royally screwed – just kidding, we love the Swedes).

So there I was in the water, checking how far the reef extended west of Chibidarra to make sure we had enough space to swing around at night in case the wind changed, when I heard loud cries from the boats and could make out Hanna shouting “Kai, you’re swimming with dolphins!”. Next thing I noticed was the grey fin dipping out and back into the water next to Chibidarra, heading into my direction. In hindsight, I was quite happy to make those two observations in this particular order. The water was quite murky and I had a visibility of only a few meters, but a couple of seconds after I dipped my head back into the water, I started hearing clicking sounds – those particular sounds dolphins make when they echolocate. Somebody was clearly checking me out. Next thing I know, a large bottle-nose dolphin appeared to my left and started eyeing me over, just like that. An instant later, we were playing in the water, swimming pirouettes around one another, for something what felt like a full minute. It was absolutely one of the most amazing moments of this entire journey for me, and easily the most amazing in the water.

In the water was also where all the other guys started jumping now, swimming after the dolphin, which disappeared again. But when everyone was already returning back to their boats, the dolphin came back, checking out those weird, noisy, colourful fish in its bay, and swimming around us playfully for a few minutes before disappearing again. So that was our welcome to Brewer’s Bay. I seem to remember we joined the Swedes on Chibidarra for the evening after throwing out our stern anchor to prevent us from drifting into the eastern, much closer reef at night.

The next day, we went out for a lot of snorkeling around the eastern headland, a section of coast with large rock formations above and below water at the foot of high cliffs. It quite overcast and thus the light conditions weren’t perfect, but it was still one of the greatest snorkeling spots we have encountered on this journey. The bottom was a tumble of large rocks, overgrown by coral, and there were so many fish, it was sometimes hard to see your fellow divers. Large, meter-long tarpons were swimming around in between large swarms of little silvery fish, evading both us and the tarpons, thus creating glittering pulsing masses moving as a single organism. Various other species such as striped Sergeant Majors and palometa were thrown in the mix in large numbers, all the while birds such as pelicans and boobies were diving for fish and the spray was rushing around the rocks. It was great scenery and great fun being surrounded by all this pulsating, vibrant life, submerged in nature.

While we were freediving and snorkeling around the headland, our Swedish friends made use of their scuba gear and took a dive beneath us: 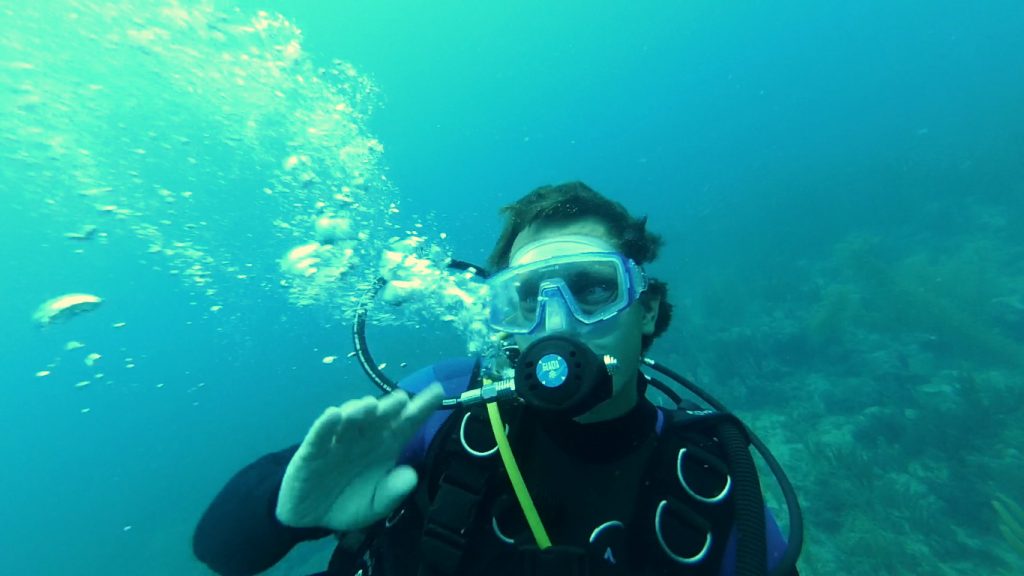 In the late afternoon, we hiked up to the caves on top of the cliffs, offering not only nice views of our two boats (and only our two boats) in the bay, but also of the dramatic cliffs facing to the east on the other side of the headland.

We reluctantly left Brewer’s the next day, heading off to Jost Van Dyke, but it’s one of our favourites.