The reason was that the weather, especially the wind, did not develop as predicted. There was supposed to be wind from N to NE with 4-5 Bft, which would have been perfect for the passage. However it turned out to be NW with 6-7 Bft leading to 3-4m waves, which is really no fun to sail close hauled. In the end the wind pushed us to far to the south to reach Ibiza, as you can see on the tracking page. It would have been possible to tack, of course, but there was also a real autumn storm with 40-50 kn announced for the Balearic Islands two days later and it became quite risky to reach a safe harbour in time before the conditions really become serious, so we decided to turn around.

I also have to admit we were not so well prepared for such kind of weather, for example we didn’t prepare enough food to just heat up and real cooking is quite impossible in such conditions. Definitely a lesson learned about autumn weather in the Mediterranean for me! Next time we do better!

Unfortunately it became quite late to leave the Mediterranean Sea and now it’s autumn with a lot of wind, mostly from West, which makes it a bit difficult to proceed further to the West, to Gibraltar. So we have to wait on Sardinia for the next chance for a passage, which will definitely not be before Monday: 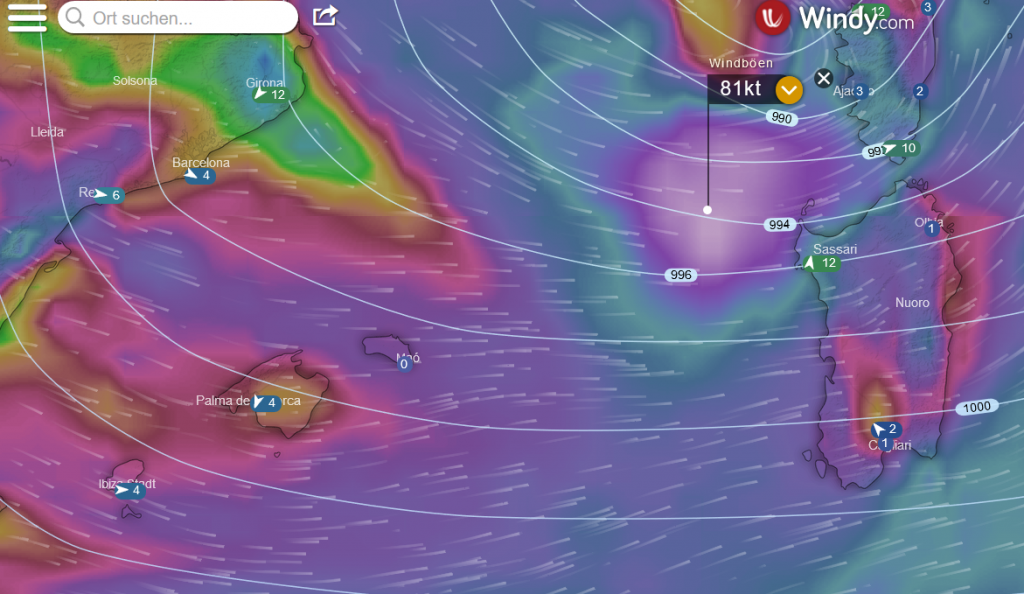 For those maybe not so familiar with nautical units and weather charts: The wind field a bit north westerly of Sardinia is predicted to have 81 knots in gusts, which is around 150 km/h, and thus real hurricane conditions. Luckily we are in Carloforte on San Pietro, which is one of the small islands in the south. So we stay here in the safe harbour and put some extra lines to fix our boat, I guess 😉

One Reply to “Autumn Weather”